When the Honeymoon is Over 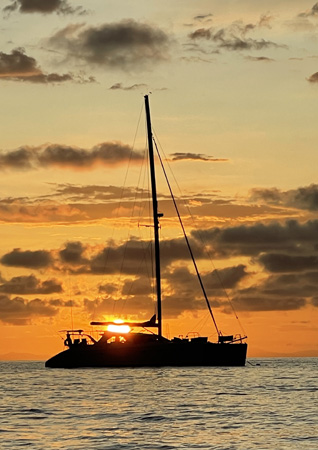 I’ve purchased a few multihulls over the years. There is a wonderful anticipatory excitement when you have finally handed over the money and the yacht is finally yours.  The first few weeks and months are very much a honeymoon period – filled with exploration, discoveries, new sensations, and acceptance of the little things because the big picture stuff is so damn good.

Then, somewhere down the track, the honeymoon is over, and you have a realisation that there is some work to do to make the yacht up to what you expect and there are some idiosyncrasies that you have to manage and accept. And there are some things that you just need to change.

I started writing this article from the viewpoint of someone who has bought, owned and loved, as of now, nine offshore multihulls.  As soon as the words flowed, I realised that I have also sold (or in one case lost) eight multihulls and that their new owners will have gone through similar experiences.

I wonder how many have thought “Why did he do that?” or “How did he put up with that?” I know I have had those thoughts and often have no answers. 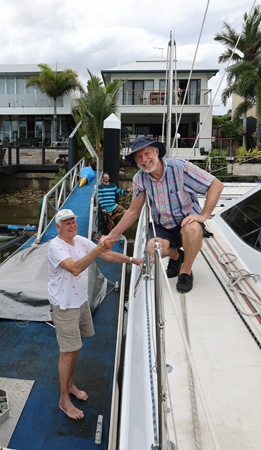 It is very hard to remove the emotion when buying a yacht.  It is, after all, all emotion – that’s why you are buying it. For most new boats you have a fair idea of what you are getting and if the reality turns out to be different there is usually some redress from the builder or designer – not a good road to have to go down, often expensive, and fraught with conflict. Unless you have bought the first of a model or had a one off built for you, there will be previous owners who will gladly give their opinion. I love the web for this – owner forums and groups hold a wealth of grounding and reality discussion. I would advise every boat owner to google their boat model and get onboard the owner’s forums to find out what you boat will be like as it ages, what bits go first, what spares are essential, and what you should not try to do with it.

My experience is different. I’ve never purchased a new multihull. When you buy second-hand, the history information is pretty limited – usually that which the seller is aware of. With luck, previous owners will have written cruising logs or had articles about the boat which give some insight into her history. Occasionally I’ve looked at a boat, gone online and googled her previous names and found some horror stories of patch jobs and design issues that had to be made or rectified.  Often, the only information is that which the seller provides. 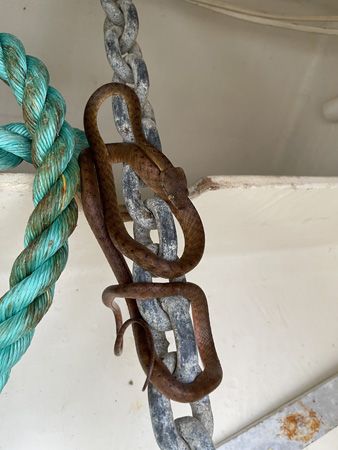 Unexpected surprise in the anchor well.

One helpful avenue that I attempt is to find is who the current owner/seller bought the boat from and if they have any contact details to share them. I then contact the previous owner.  They are usually more than happy to give a detailed history and stories of the good, the bad and the ugly about the boat and design. Afterall, they have no vested interest now in the boat being sold so honesty is more likely to prevail. When I am contacted, I try and do the same.

When buying a boat make lists. Make a list of the good points, the equipment that is likely to remain long term and the condition of the essential equipment – i.e., engines and sails. I’m an optimist. I will always assume a well serviced diesel engine that has done 6000 hours has plenty of life left in it. If the sails look a big mouldy but have a reasonable shape, then I guestimate my time frame for eventual replacement.

The potential job list when looking at a second-hand purchase is enlightening in two ways. The first is when you work out real value replacement costs. This is useful when negotiating price and making a real determination about whether you can afford the boat long term. The second is when you look back on your list down the track (having purchased the boat) and realise that your underestimated those costs. Been there, done that.

As a seller, I have never discouraged the new owner to contact me if they have any questions. When the new owner had a problem to solve – usually electrical or mechanical – it helps if you had bounced your thoughts off someone who may have dealt with it previously. One of the items that I give to a new owner each time is my ‘manual’. This is an alphabetical handwritten notebook with the ‘where is it, how did I fix it, what part number is it’ list. I sometimes remember also to detail when new items are purchased and where (for warranty claims). Most buyers that have contacted me all say how useful this is. I know it was useful when I had jobs to do on my boat – but most boats I’ve bought boats from rarely supply anything other than the original equipment manuals (which are usually redundant these days if you have web access). The magic is out there. Spectacular sunsets, enough sail power to easily foilboard off the stern and playing with my first electric winch!

Catherine and I now have a new Favourite Child. Mid Covid I raced in Airlie Beach Race Week and had some interest from someone wanting to buy our Crowther 45. She wasn’t really for sale and with new electrics, new engines, and a new paint job I felt she was ideal for us for the next few years at least.   But when someone makes me an offer I go through the ‘what would I buy?’ thought.

We scanned the web and magazines for catamarans under 50ft – there was not much on offer that combined performance and cruising comfort, certainly nothing as good as our boat.   I noticed a Roger Hill 45ft catamaran in New Zealand for sale – Kai Pai – that was owned by a friend who we had cruised with in Fiji a few years back.  I phoned him and had a chat. She was definitely an option, but there was no way I could travel to New Zealand at that time – borders were shut.

A couple of months passed and I was tossing over my thoughts with yachtie friends back at Bluewater in Cairns and one said he had a mate with a Roger Hill catamaran who was keen to sell his.

“Is it in Queensland?” I asked. Even crossing the state borders was a challenge.

“What? Where?” It seemed incredulous that there would be one in Cairns for sale.

“Let’s jump in your dinghy and go check it out,” he suggested.

So, we did.  Literally tucked around two corners in the Bluewater Canal Estate was a Roger Hill 15.9 performance cruising cat. In full survey, looking both stunning and loved.

Lawrie introduced me to the owner and a few days later Catherine and I visited the owner and did an inspection.  After stepping aboard and going into the main cabin Catherine was enthusiastic.

“I think,” she said with a beaming smile “that we need to pack up the house and move aboard”.

We were both smitten. The emotions kicked into overdrive. I contacted a few people who had expressed offers on my catamaran and we eventually settled on the buyer who originally showed an interest at Airlie Beach. There was one barrier though. We were making a leap from 45ft to 53ft – a lot bigger and a lot more money. There were some things in my favour. Covid-19 was running rampant, and we were heavily understaffed at work (I’m a General Practitioner). I volunteered to work seven days a week – and did 148 days in a row as a result. Catherine was well aware of the challenge, so she set to emptying our yard of non-essentials – selling the caravan and campervan, tinnie, our Markham Dominator power catamaran and numerous smaller items. Getting desperate, I sold my much-loved Landrover Defender to my son Baden.  On the day before settlement, I was about 50K short. Way back in 1987 I got over the line using credit cards to purchase a Crowther 37 racing catamaran D Flawless. Not ideal but I had the option of earning it back by working long hours and weekends. Thirty five years later I did the same again.

When the money was transferred, we got the keys and our honeymoon began. 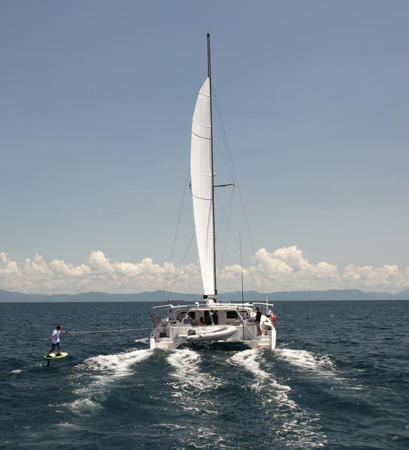 We are only the third owners of our new yacht. In our contract for the boat we sold we kept the name and after a couple of weeks our Roger Hill 15.9 catamaran was renamed Favourite Child.

The new adventure began. We explored systems and discovered things we loved and others we though we would change. There were a few surprises. We had a resident python in the anchor well. Exciting, not anticipated, not ideal. On the fifth reef trip an engine started to overheat. One of the beautiful things about this catamaran is the spacious engine room. I checked the most likely culprit – the water cooler impellor. There was just half of one vane left! Not being used much during Covid had hardened the rubber. An easy fix. My job list initially was not that long.  We are now five months; a dozen reef trips and a wet season into sailing her, and the job list is really a ‘wish list’ now.

There are some big-ticket items that we will upgrade over the next year or so. She needs a performance set of sails. The soft top bimini is okay for day sailing but you cannot enclose the cockpit in the rain, so a hardtop is being constructed as I write. Lots of solar panels are on order to take reliance off the engines. And lastly, it is a big boat and with it comes a bigger regular maintenance schedule.

Between planning upgrades, we sail. The magic is out there.  Spectacular sunsets, enough sail power to easily foilboard off the stern, playing with my first electric winch!

My Favourite Child Manual is being written up each time I do a task, store a tool or order a part. The honeymoon is not yet over but there is a maturing of the love and building passion for the long-term adventure. We move aboard in the not-too-distant future.